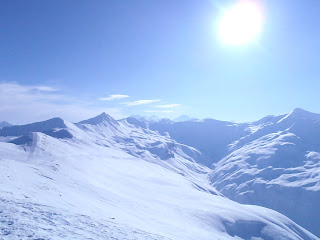 We had a really magnificent week away in Italy – this was all part of my dad’s rehabilation after he broke his ankle/leg in Switzerland on the Piz Trubinesca. You may know about this if you’ve chatted to me – if you don’t you can read the over media hyped version @ you can see it here!

We stayed in Livigno in the Picolo Tibet – which is run by Ercole (I think that’s how you spell it!) – he was a fellow patient in the St Moritz hospital that my dad spent 20 days in following the accident.
We spent the first part of the week skiing – it’s really good swishing down the slopes on the skis. I changed to snowboarding a couple of years back, but have since gone back to skiing. Due to a damaged board after a big gust in Scotland slightly damaged the board, and also I’ve got the gear for ski mountaineering now! 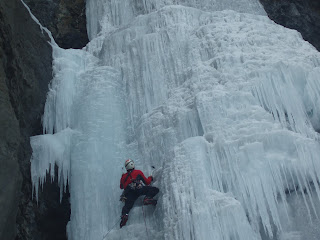 The second part of the week was spent ice climbing. The approaches where pretty awkward due to the depth of the snow – not having snow shoes really tells. Post holing as the “yanks” call it is really exhausting and time consuming when approaching routes. It seems to take a quarter of the time to get down after the route! It may well be time to invest in some snow shoes – the only problem is that they need to be easy to carry and collapsible – it seems that there is already a patent pending!
The first ice route was a WI 4+ it took about an hour and half to get to the bottom of the route the guide book time for the approach was half an hour! The Joy of Post Holing! It was really interesting climbing the top pitch the ice must have been half a metre thick sheet of ice. It kept thudding as you placed the axes and crampons. Quite interesting really – I didn’t put much protection because the ice wasn’t that thick!!! Both pitches where fantastic. 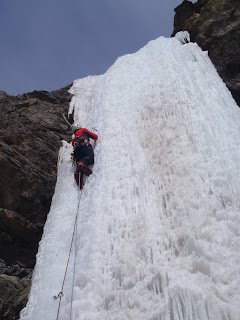 The second ice route was a WI 5 the guidebook says it is only a 90 metre route. It ended up being more like a 200 metre route. The gully was quite long to get to the main pitch which is a really nice sustained 5 pitch. The ice was just good enough to climb on the left – the centre was all rotten out – it had been in the sun too long and was really mushy!!! It was a really good route to do on the final day before travelling back to Zurich. Something to get the arms pumped!!!
A really good trip and a good place for my dad to continue his rehabilitation – to quote after the WI 4+ – “That’s the hardest thing I’ve been on since the accident!”.
Hopefully Scotland will stay/get in nick again so we can get up there for some more ice climbing in the coming weeks. Back to training & work for now!